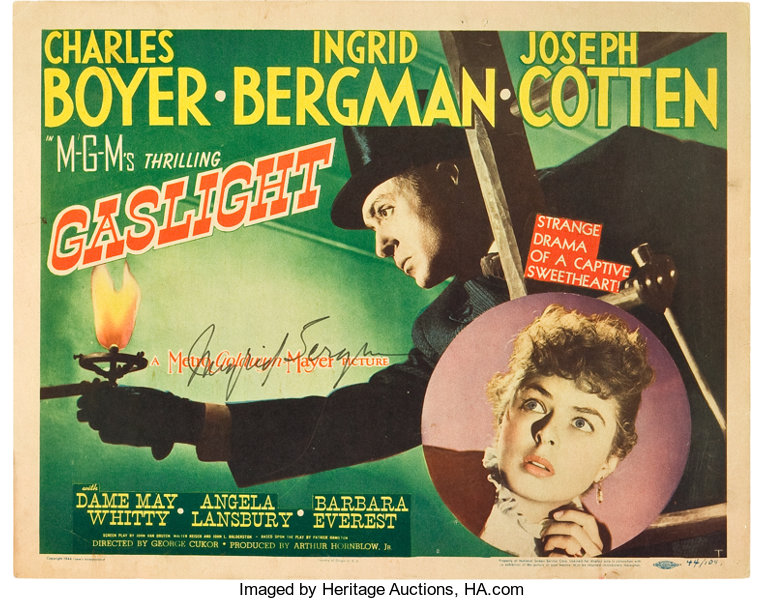 In my own clinical work of late, many of my patients report a rocky re-entry back into a sense of “normal,”  at least in consuming news media.  Some overall relief is re-emerging that not every input needs some rigorous fact-checking and examination for subterfuge or manipulation.  There’s also some understandable chin-rubbing on what has happened to trustworthiness, and on how misinformation erodes that trust both personally and in society.

There’s a term that has gotten a lot more play lately in the theaters of political intrigue and conspiracy theory-mongering (a profession stinkier than fish-mongering… just sayin’.) It comes from an old movie.

The Academy Award-winning 1944 psychological thriller, “Gaslight,” starts with a couple of wealthy newlyweds settling into their London townhouse.  It’s a great flick so I won’t give away any details if you haven’t seen it.  But our reference here is to the treacherous behavior of the cad of a husband, who slowly but surely connives to convince his new bride that her mind is going south in memory and perception.  The anthemic trick he plays, among others, involves messing with the gas-powered light sconces while denying there’s any change in the household lighting – “fueling” (heh) her sense of eroding sanity as even her basic sensory perceptions are questioned.

“Gaslighting” has become a useful nickname for the pre-meditated generating of a fragile sense of psychological health in another.  Whether in an individual or group, the two-step dance usually involves causing some event or interaction that is provocative to the other; then denying or minimizing the reaction of the other, or even of the existence of the event.  From the psychobabble thesaurus, we can categorize this behavior as sadism (doing harm to another for one’s one benefit); those who traffic in this malevolent action generally have character pathology framed as sociopathic (messing with others for personal gain) or even psychopathic (personal, direct pleasure in cruelty to others.)  It’s nasty stuff.

The individual/interpersonal version of this dynamic is a common aspect of dysfunctional relationships and families, often generating trauma in its many flavors.  My shorthand for helping educate survivors of such cruelty includes a pair of linked ideas and consequences:

• there’s the “sin of commission” and the “sin of omission”:  the traumatic event is committed and causes harm, often indelibly marked in memory.   But what supercharges subsequent PTSD is the omission – the denial or minimizing from the abuser, the family, the friends, and even the health care system, that anything unusual happened to account for the suffering experienced.  There’s no validation, no empathic mirroring of the painful circumstance.

• then, the paired consequence, a doubling of the trouble: the targeted individual not only endures the direct physical and/or emotional suffering of the event, but also has one’s own perception of a healthy, intact awareness in mind put in question.  The cruder shorthand:  “I feel bad, AND crazy.”

The gaslit party has some complex choices in response.  Allying with the sadist’s distortion tosses out a healthy respect for and belief in one’s own perceptions and awareness, substituting not just another outlook but often that of the bad actor.  That substitution can be all-in (as in cultish belief systems) or more fragile (based in a self-ID of, “broken me”).

Door #3 requires some skill-building; we’ll get there in a sec.

The broader, group-think version of this act of distortion is in front of us presently, usually at the core of wondering how otherwise logical people can hold wildly irrational beliefs: in satanic, pedophilic cannibals, or intricate plots of the faked mass murder of school kids, or millions dead of a virus suggested as somehow an elaborate fiction (governments inept in basic vote tabulation, but also super-stealthy and efficient in this cloak and dagger stuff.)

Writ large, this is also gaslighting: of the true suffering of many globally as well as in our own nation, in need of an honest attending to that suffering in economic table-tilting and undeniable inequities in race and gender.  The broader gaslighting is more complex than can be summarized here, but appears as…

This collective gaslighting generates another distorted twosome of conclusions. One is hopelessness, a totalistic, dangerous conclusion that has been claiming lives at much higher numbers in the last decade from drugs and suicide. Another is an “all-in” alliance with the grievance, with some highly-tuned promotional tactics feeding the aggrieved, 24/7.

I know… the inevitable “mindfulness to the rescue” is my familiar blog finisher in promoting Practical Mindfulness.  But meditation truly makes a difference in the individual cases; here are some ways.  With routine practice in observing, we cultivate a development of our observing self as our true “home” – a trusted perch from which to more accurately perceive the ebb and flow of news, some more genuine and some less so.

The more granular aspect of meditation involves a gradual learning about what stuff we read or hear that resonates as valid, or does not meet our own gaslighting “smell test.”  We can become more discerning of interactions that are trustworthy versus ones that are insincere or uncertain.

When we can operate in a confident, competent, mindful self-awareness, the gaslighters lose their spark.

Take care, keep yourself and others safe.  GCS